Every March several ten thousand dance music artists, DJs, label representatives, fansÊ and media come to Miami Beach for the annual Winter Music Conference. Since three years Pearlicka Records releases a very special compilation presenting the best dance hits for the spring. This year 34 artists collaborated to produce 21 amazing tracks. Some of them already world famous like John Creamer, Jason Rivas, NTFO, Delyno or 2Housspeople, others still on their rise, like Yuri Lima, Gho5t, Jerome Laiter, Benji Solis Jr or Seight. Music has been licensed from several other labels like Playdagroove, Sintope, Lost in House, Heaps and Frequenz5 so this compilation is not only tied to one label but presents the very best of upcoming house music for spring 2011.Ê

The cover art is created by world famous South Beach artist Herbert Hofer, who lives since over 20 years on Ocean Drive and portrays the Miami Beach life style in his paintings.Ê

Pearlicka Records was founded in 2008 in Miami Beach by Daniel Hubalek aka Whodany, and has since published over 50 releases with over 100 artists and remixers involved.Ê

Buy it at Amazon, iTunes, Beatport or listen for free at Deezer.

August 2nd, 2010
PEARLICKA RECORDS ARTIST DALYX PRODUCES SONG ABOUT SNEAKER JEWELRY
Pearlicka Records collabiration between Dalyx and Sneaxx is one of our best examples of cross promotion. Selling music alone these days is tricky. So let's add some bling bling to it. To be more exact sneaker jewelry. A brand new, super cool product. Dalyx loved SneaXx, so he wrote a song about it. Pearlicka Records did a deal with SneaXx. 3 remixers made underground club mixes out of the commercial original radio version. And now the whole package will be getting the best possible radio promotion through media2radio.com. Let us know if you hear SneaXx on your radio!
Dalyx - SneaXx (Aulden Brown & Ricky Marconi Remix) peaked at number 2 at DJTunes Dance charts!

June 8th, 2010
PEARLICKA RECORDS IS VERY SUCCESSFUL AT LICENSING ITS SONGS TO OTHER LABELS

How an esoteric book turned into a YouTube series, a documentary, an audio book and a chill out EP.

Miami based esoteric guru James J. Traitz is teaching how to create your own reality. His teachings go in the same direction as "The Secret" or "What the Bleep Do We Know", except that he goes a lot deeper. James J. Traitz wrote the new age philosophy book ÒDonÕt Stop Your MindÓ. This book was the inspiration for a YouTube series which he produced together with the filmmaker and viral marketing specialist Daniel Hubalek. This YouTube series currenly has 63 episdes and was seen by over 300,000 people.

Footage of this series claimed even more success. It has been used by an unknown editor for a 10 minute documentary named ÒMatrix of IllusionÓ which is exploring the power of consciousness and features next to James J. Traitz famous people like David Lynch, Deepak Chopra, David Wilcock, David Icke or Bill Hicks. This documentary has reached far over 1 million people.

The YouTube series of DonÕt Stop Your Mind then got released as an audio book. One year later Pearlicka Records approached several chill out musicians and asked them to remix the audio book. The feedback came from all over the planet. Zzzzra from France, Est Et Non from Australia, Starflower from Canada and Toni Latenz as well as Johannes Jaeger from Germany. They present their own musical interpretation of ÒConsciousnessÓ, taking the teachings to a higher elevated level. New YouTube episodes are in post production and seminars are planned.

About James J. Traitz:
James J. Traitz was born in Philadelphia, Penn. on May 2nd, 1950 and grew up in South Florida , Majored in philosophy with a minor in theology. Graduated from The University of Miami law school in 1975. During the past 35 years has practiced trial law , studied and taught martial arts, written a 'new age' philosophy book ,as well as an audio book and released a chill out EP. He is featured in 63 videos on YouTube (produced by Daniel Hubalek / Whodany Inc) These 1-4 minute videos deal with the science of nature, the existence of matter and the Soul, higher dimensional reality, quantum physics as well as the esoteric teachings of Gurdjieff and Castenada . Mr. Traitz has worked with James J. Hurtak of the Acadamy for Future Science for over 35 years. Mr. Traitz holds the rank of 4th Dan (4th degree blackbelt -the Renshi/ sensei grade ) in Okinawan Go-Ju Ryu karate. Mr. Traitz is available for speaking engagements dealing with Self-realization and personal empowerment.

Consciousness - The Chill Out Mixes

March 14th, 2009
PEARLICKA RECORDS SIGNS FOR LICENSING DEAL WITH MAJOR DUTCH RECORD LABEL WHITEVILLA
Today the double compilation CD "Madhouse 2009" by DJ Jean was released on White Villa in Netherlands. "Whodany feat. Patci - My World (Jason Rivas extended Club Mix)" is the first track on this compilation. Other artists on this compilation are: John Dahlbeck, D.O.N.S., Deadmau5, Sebastien Leger and many more. This was the first ever licensing deal for Pearlicka Records. We are very proud to be part of this great compilation. 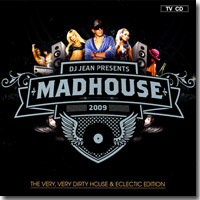